In summary, a typical anime about the summer in high school, complete with trip to Okinawa and four triangles. With the twist of one of them is an alien and the fact they are decide to make a film over the summer. 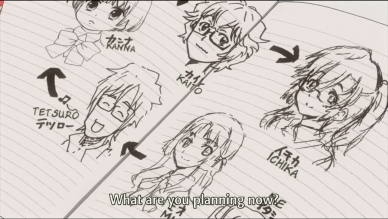 This anime has a similar feeling to it as Anohana. Except not as good. admittedly though, Anohana is a tough one to beat though in this genre. Ano Natsu de Matteru is a enjoyable if typical drama. The male lead, Kaito is a typical lead with very little personality and his main trait being that he loves of filmmaking. He falls in love with a new student at his school. Ichika, an alien who is searching for a place in her memories and ends up living at his house. As you know, so many animes work. Kaito doesn’t quite live alone but to clear that end up his sister goes on a work trip for the summer to Boliva of all places so its just the two of them. And his friends when they come barging round.

I’m not going to lie, I spent most of this anime not really liking Ichika. She’s very bland. With even less to say about her than the male lead. Apart from the fact she goes beyond in love with him and almost to obsessive early one. Following him whenever she sees him with other people. Though she doesn’t seem to quite realise it at first. I find her tiresome and I’m not sure how much she actually adds to the story ignoring being an alien. Also I found my self taking Kanna’s side in the fight for Kaito’s heart. Ichiro just appears out of nowhere and steals it without giving Kanna a chance. But I guess that life. If it hadn’t been a alien, it would have been something else I think sadly.

Honestly the amount of time spend on the characters is enough. They are a pretty pathetic lot really. Massive love rectangle between the lot of them, with an added two girls for the okinawa episodes. I quite like the fact none of them end up with who they want though. More realistic that way. The character I wished we had learned more about was Remon/Lemon, though I realise this anime was the wrong genre for that.

Lemon is a young looking girl who is actually much older than she appears, though her actual age is never specified. She is introduced as Ichika’s classmate who for unknown reasons wears a different uniform to the rest of the school. It quickly becomes apparent she knows far more than she lets on. It is discovered eventually she works for the men in black but its an sideline. She is mostly in charge of filming the events which are going on. She is the most interesting one to me and I wish we had learnt more about her. Like why she was there in the first place? Does she spend every summer at that school or what?

I give this anime a bronze. It was enjoyable but nothing special nor unique and I spent much of it disliking the main characters which always knocks a show down a few pegs.